MSS
The Federal government has disclosed that it is ready to aid Nigerian students who fled from Ukraine and Russia due to the ongoing war between both countries, in gaining admission into universities in Nigeria.
The Ministry of Foreign Affairs, in a statement released today July 4, 2022, instructed the affected students interested in continuing their education in a Nigerian university to visit the website of the ministry at https://foreignaffairs.gov.ng/ for assistance.
CLICK HERE TO BEGIN APPLICATION

The Federal Government of Nigeria wishes to inform Nigerian students who returned from Ukraine following the conflict in that country, that efforts are being made to facilitate their placement into various Nigerian tertiary institutions, to enable them continue their studies.

In this connection, Interested students should visit the Ministry of Foreign Affairs website: https://www.foreignaffairs.gov.ng and complete the online Nigerian Student in Ukraine (NSU) registration form with the required information on or before 15th July, 2022. 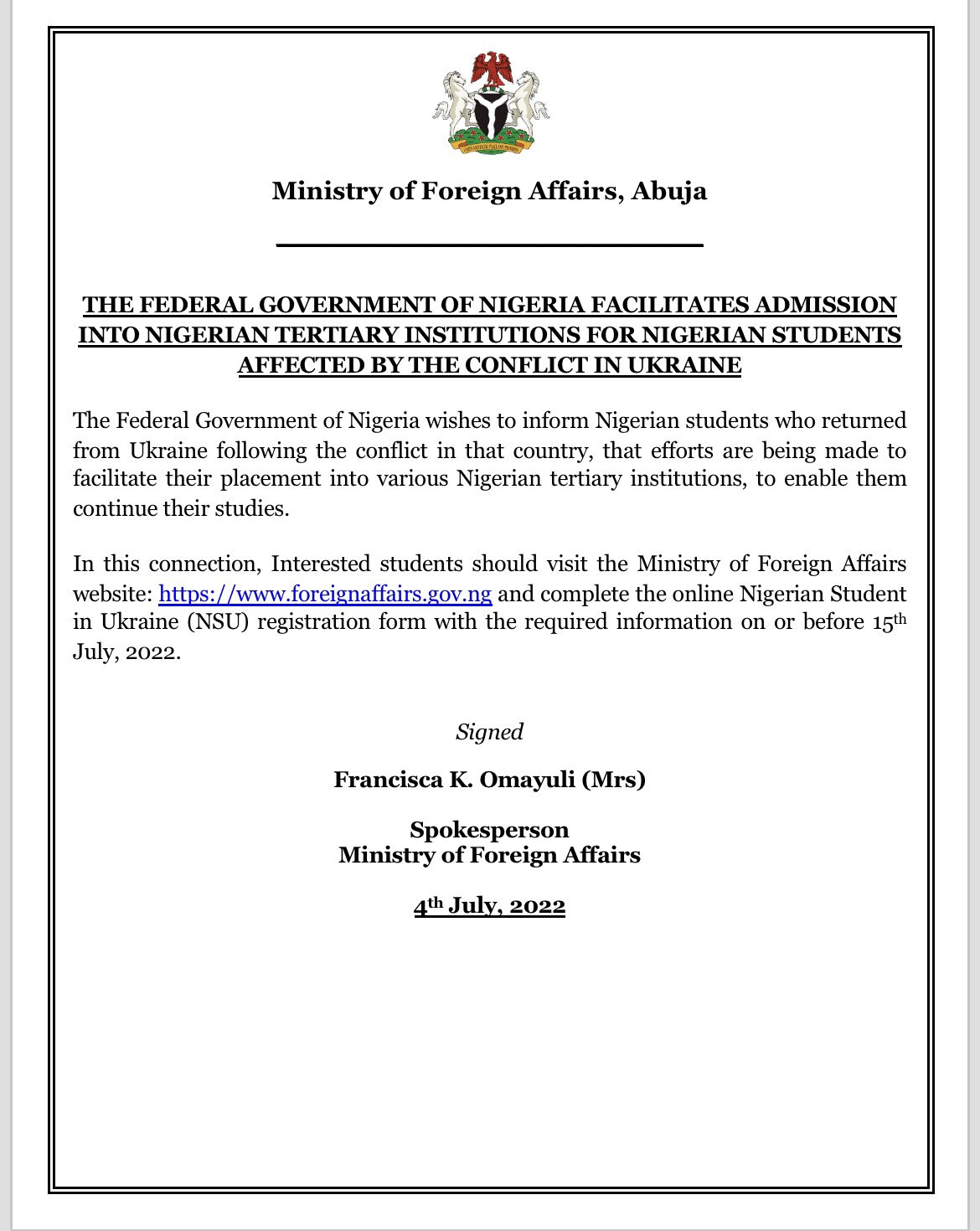 On 24 February 2022, Russia invaded Ukraine in a major escalation of the Russo-Ukrainian War that began in 2014. The invasion caused Europe’s largest refugee crisis since World War II, with more than 8.4 million Ukrainians fleeing the country and a third of the population displaced.
The invasion began on the morning of 24 February, when Putin announced a “special military operation” to “demilitarise and denazify” Ukraine. Minutes later, missiles and airstrikes hit across Ukraine, including the capital Kyiv. A large ground invasion followed from multiple directions. Ukrainian president Volodymyr Zelenskyy enacted martial law and a general mobilisation of all male Ukrainian citizens between 18 and 60, who were banned from leaving the country
Russian attacks were initially launched on a northern front from Belarus towards Kyiv, a north-eastern front towards Kharkiv, a southern front from Crimea, and a south-eastern front from Luhansk and Donetsk
InMinistry of Foreign Affairs, Nigerian Student, Registration Form, Tertiary Institutions, Ukraine