89mins: United’s goal has lived a charmed life and Nunez is again unfortunate not to score as the ball just will not fall his way after a dangerous cross into the box sparked chaos in the Red Devils’ defence.

87mins: Lady luck has not been on Liverpool’s side in Bangkok.

Salah’s delicious effort beats Heaton but comes back into play off the upright and Nunez, unmarked in front of goal, then lashes the follow-up high over the bar.

85mins: Half-chance for Liverpool. Alexander-Arnold’s cross is deflected into the path of Naby Keita on the half-volley but he can only sky his effort clear over Heaton’s crossbar.

80mins: That goal has sucked all the remaining life out of Liverpool, who had been by far the better side in this second-half.

United still look dangerous on the counter but are much less assured in their passing and pressing than in the opening 45 minutes.

76 mins: GOAL! Liverpool had been all over United but they get caught cold again.

Bailly brings the ball out from the back and plays in Pellistri, who exchanges passes with Amad before slotting home United’s fourth. Totally against the run of play but Ten Hag will not care a jot.

70mins: Liverpool are looking far the more threatening here and almost reduce the deficit to two.

Robertson picks out a trademark sweeping pass into the path of Nunez, who fires a well-hit shot straight at Heaton in United’s goal.

67mins: De Gea is going to have to come off here as he has picked up an injury, which will be a bit of a worry for Ten Hag.

Tom Heaton is coming on for the Spaniard.

64mins: The injection of class is clear to see already from Liverpool. Salah and Alexander-Arnold exchange deft passes but the full-back cannot slide in Nunez as Bailly is there to cut it out.

60mins: Right, some more substitutions for me to try – and fail – keep up with.

Van Dijk, Salah, Robertson, Alexander-Arnold and Nunez are all thrown on by Klopp with half an hour to go.

A first glimpse of @Darwinn99!

59mins: United catch Liverpool on the counter again but Pellistri does not look up and fails to play in Van de Beek, who would have had a clear run at goal had the Uruguayan spotted him.

51mins: Slow start to the second half following those changes. It has not quite lived up to the first, which was more akin to a basketball game.

Klopp plans to use three different teams each playing 30 minutes each.

Liverpool’s line-up is therefore likely to be strongest towards the end, with Salah, Alexander-Arnold, Robertson, Thiago and – of course – Nunez all set to come on at some point.

Thiago, Salah and new signing Nunez are all expected to make an appearance in the second half, which has just begun over in Bangkok.

Malacia is about to make his debut as he is coming on for United, along with the likes of Wan-Bissaka, Charlie Savage, Zidane Iqbal and Anthony Elanga.

Adrian replaces Alisson in goal as the match gets back underway.

14:59
United set to make widespread changes at the break

Like Klopp in the first half, Ten Hag is likely to shuffle his pack at the break.

Wan-Bissaka, Bailly, Malacia, Telles, Van de Beek, Savage, Iqbal, Pellistri, Elanga and Amad are all out on the pitch training during the half-time interval. 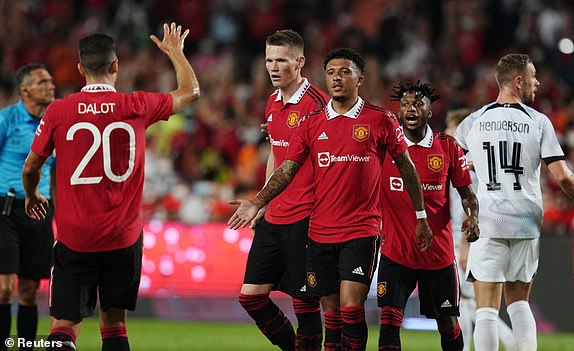 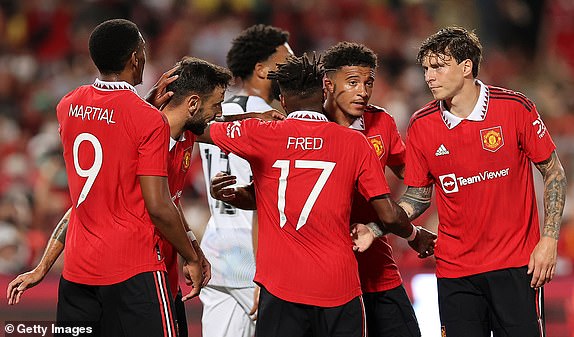 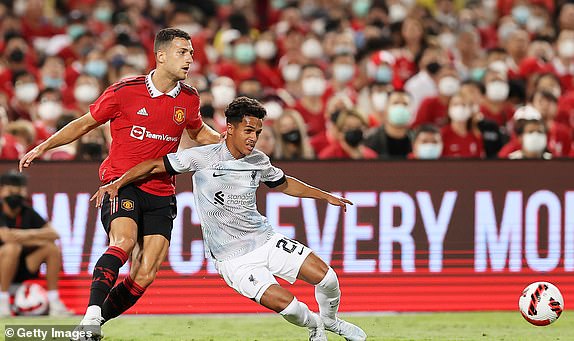 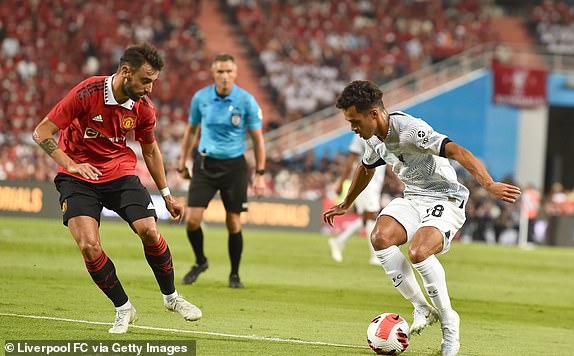 A breathless first half in Bangkok ends with United three goals to the good.

In truth, both sides could have scored more in an end-to-end contest. Liverpool had chances of their own, twice hitting the post, before those quick goals from Ten Hag’s side.

Sancho put United ahead before Fred and Martial found the net in the space of two minutes to give Ten Hag the perfect start to his Old Trafford rein.

43mins: Curtis Jones, another of Klopp’s 10 changes, waltzes through United’s defence but his left-foot shot is tame and easily saved by De Gea.

Still end-to-end in Bangkok, with plenty of challenges flying in. You wouldn’t know this is a friendly…

40mins: Liverpool are unfortunate to be three goals down here but they are still pressing forward.

Milner’s curler from outside the box is comfortably gathered by De Gea before Raphael Varane is caught late.

35mins: United have a great chance for a fourth!

Sancho plays a cute pass through to Dalot, who opts to smash his effort from close distance and it cannons back into play off the woodwork. Another let-off for Liverpool.

Just before the third goal, Klopp had made 10 changes, including bringing on the likes of Bobby Clark – the son of Lee – and James Milner.

32 mins: GOAL! Ten Hag could not have wished for a better start here. Williams, one of 10 substitutions by Klopp, is caught flat-footed and Martial races clear before dinking his effort over Alisson and into the net.

30mins: What a goal this is. Liverpool don’t clear their lines, despite having several opportunities to do so, and Fred makes them pay with an audacious lob over Alisson’s head from 20 yards.

Liverpool are now set to make a raft of changes here.

The calmest man in the house.

26mins: United again have space down the right, where most of their attacks have come from so far.

Fernandes feeds McTominay around 15 yards out but the midfielder’s strike is fired straight at Alisson, who comfortably gathers. Another decent chance for Ten Hag’s side there.

22mins: Chances are coming thick and fast now. Phillips again makes an error which frees Sancho on the right but his pull-back is meekly fluffed towards goal by Rashford, who has to make a better contact with the ball than that.

21mins: United are causing problems with their press but it has left them open to Liverpool’s counter-attacks, with their wide players providing issues for their opponents’ back-line.

It looks as though Shaw may have an injury here…

14:19
How did Liverpool not score?! Diaz hits the post

18mins: Liverpool should be level. Chambers twice has his efforts blocked by United defenders before Diaz strikes the post with the goal at his mercy.

It should be two! Rashford picks the ball up from Phillips, who gave it away rather needlessly, plays a one-two with Martial and then drags his shot wide of Alisson’s right-hand post. An excellent chance for United to double their lead. 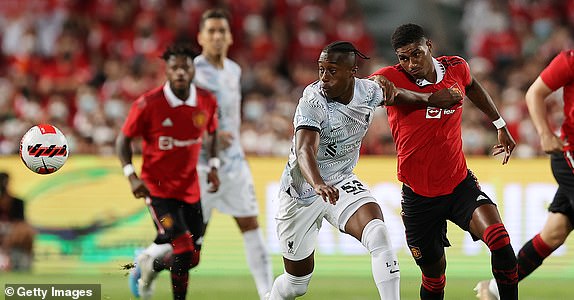 12mins: GOAL! United are in front through a lovely finish from Sancho. There is a bit of trouble in the Liverpool defence and it falls nicely to the England winger, who finds the bottom corner.

10mins: The best chance of the game so far falls to Liverpool and to Luis Diaz.

The tricky Colombian winger runs at Diogo Dalot before cutting inside and attempting to curl his effort beyond De Gea, but the Spaniard is equal to it.

6mins: Fairly end-to-end start here. Chambers is the latest full-back to cause United problems and his pass across the box is briefly fumbled by De Gea, who really should have done better there.

5mins: In response, United have a decent chance of their own on the counter-attack as the ball falls to Fred and he has Jadon Sancho in oceans of space, but the Brazilian midfielder’s pass is poor and is easily intercepted by Tyler Morton.

3mins: Liverpool have had the majority of the early possession but it is noticeable that United are pressing higher than we are used to seeing.

Isaac Mabaya gets past Luke Shaw on the Liverpool right and tries to flash the ball across the box, forcing De Gea to stick a leg out and divert the ball away from the waiting frontmen.

And we are underway in Bangkok. United are in their new home kit and Liverpool play in their ‘dizzying’ away kit design.

Sounds like a decent atmosphere too as Liverpool kick off after the players take the knee.

13:55
This may be a friendly…but there is a trophy at stake!

The two sides will be playing for a major honour (!) in Bangkok today as the winner will lift the Bangkok Century Cup.

The warm-ups are complete and the players will soon re-emerge ahead of kick-off.

A fair few reports on social media suggest the stadium will not be full but there are still expected to be around 40,000 present to see the latest instalment of the intense rivalry between United and Liverpool.

13:47
The players are getting ready 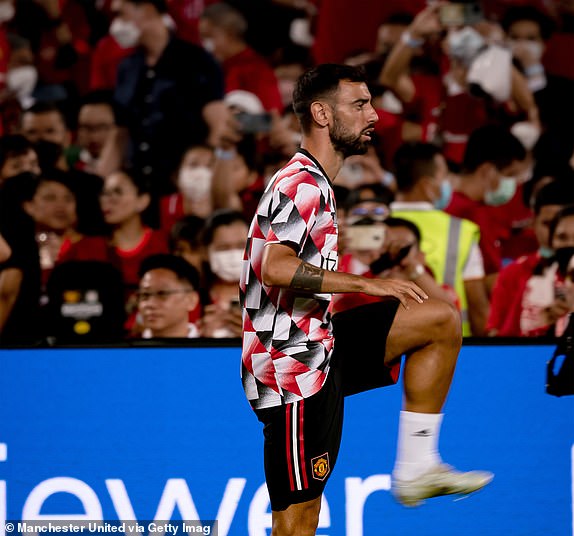 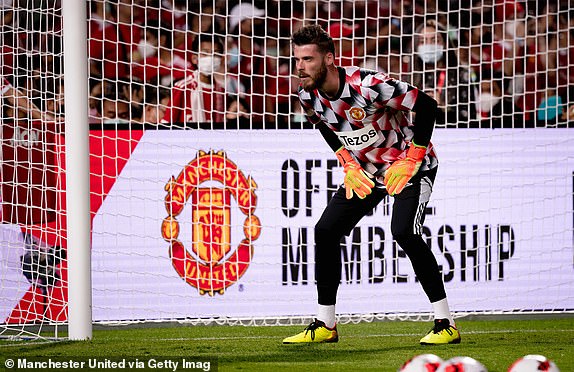 Ten Hag has been speaking to club media ahead of kick-off. ‘It is [quite] something that you play your first game immediately against Liverpool, one of the best teams in the world at this moment – maybe even the best team,’ he said.

‘I am really looking forward to it and the players are ready for it. We had some good training sessions but of course there is a lot that we need to develop.’

Ten Hag says it will be natural if there are ‘misunderstandings’ between his team as they play their first game under him.

In case you missed it, here are how the teams will line up this afternoon: