The event, which is holding at the Eagle Square in Abuja, will see 2,340 delegates queuing to choose their preferred presidential candidate.

In the lead-up to the exercise, 28 presidential hopefuls had picked the nomination and expression of interest forms, but five of them later pulled out.

The run-up to the special convention, which is billed to run till Wednesday, had been marred by intrigues over the zoning of the presidential ticket and consensus candidacy.

While a consensus candidate was said to have emerged on Monday, President Muhammadu Buhari on his part said the delegates should be allowed to decide the party’s presidential flagbearer.

The northern APC governors also canvassed for the party’s candidate to come from the southern part of the country.

11:48 pm: I believe Nigeria needs a mother. But I am stepping down for Bola Ahmed Tinubu – Uju Ken-Ohanenye.

11:22 pm: I am stepping down for Vice President Yemi Osinbajo – Nicholas Felix

11:18 pm: I am not running for President to accumulate riches, but to save the lives of ordinary Nigerians. – Rochas Okorocha

11:14 pm: I am the most experienced of all the candidates. If you vote for me, I will improve the economy. – Rotimi Amaechi

11:09 pm: I am not here to step down for anyone. I am here to step up as the 16th President of the Federal Republic of Nigeria. – Tunde Bakare

11:00 pm: The APC should have zoned the ticket to the South-East. Where is the justice? – Ogbonnaya Onu.

10:51 pm: A presidential hopeful, Bola Tinubu, secured the support of some of his fellow aspirants to get the party’s ticket as six of them took turns to announce that they were stepping down for him.

9:46 pm: “I present myself as a great intellect, with a background in academics. I am an old head on a young shoulder,” said Governor Ben Ayade.

9:40 pm: “It is time for us to bring science and technology to the forefront of our social and economic policies,” said Senator Ajayi Boroffice.

9:36 pm: “As president, I will introduce student loans so every child can have access to education,” said Senator Sani Yerima.

9:32 pm: The Senate President, Ahmad Lawan, says he is eminently qualified to be President having spent 23 years in the National Assembly.

9:15 pm: APC chieftain, Bola Tinubu, says his success as Lagos State governor makes him the most qualified aspirant to succeed President Buhari in 2023.

8:15 pm: Things are not falling apart in APC. Things are holding up. We are united and are speaking with one voice. – Abdullahi Adamu, APC National Chairman

7:51 pm: APC is a party that will always be guided by the rule of law, says Hope Uzodimma, Chairman, Election Planning Committee, APC Convention

7:43 pm: The APC presidential primary officially kicked off following the arrival of President Buhari at the Eagles Square.

The First Lady, Mrs Aisha Buhari, was also present at the venue, although she arrived earlier than the President. 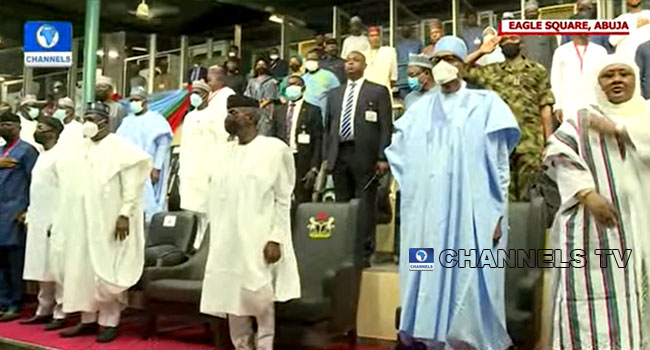 Next post Talks with FG Panel over Strike Fruitless – SSANU